Recently I was a guess on the Star Wars Underworld Podcast. The hosts and I discussed the newest clone wars episode, and talked about my art. Below is a link to the podcast.
http://www.starwarsunderworld.com/2011/11/29/the-swu-podcast-episode-12-11292011/

In the podcast I mention a new Boba Fett piece I was working on. Here it is. This uses pencil, marker, and color pencil. Hope everybody enjoys it. 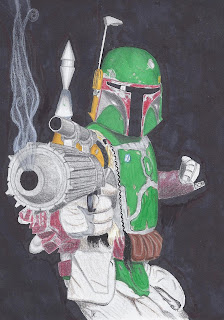 First is a set of 2 cards. The Left card is Count Dookufrom the Clone wars done entirely in blue. I had the idea of doing clone wars characters in one color, and felt dooku would be more mysterious in blue. The second card is a scene card from the original Clone Wars miniseries featuring Ki-Adi-Mundi, Shaak Ti, and General Greivous. 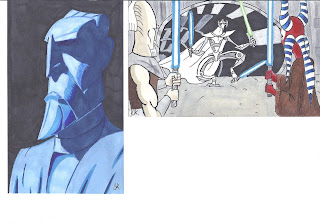 Next is a fantastic sandtrooper. It is in pen, pencil, and marker. 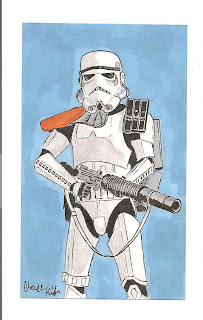 Finally is a set of 2 cards. Top is Anakin in pencil with Bravery written in Japanese calligraphy beside him. Bottom is a Yoda card done in marker and color pencil. This is done as a continuation of the "all in one color" theme I did with the blue dooku card. 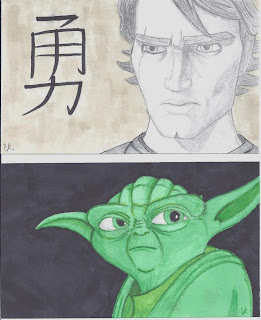 more of my stuff.

Here is a couple more sketches I've done more recently. The first is a cool batman charcoal sketch I did. Next are two sets of sketch cards I gave away. They use either ink, pencil or both. All together there are ten cards. 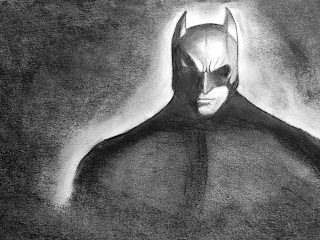 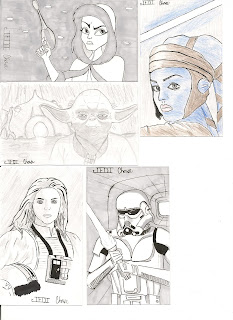 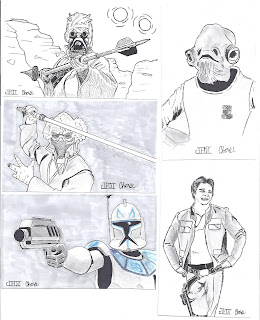 Posted by jedichase at 10:57 AM No comments:

Here is a couple more pieces I did a while ago. First is a Plo Koon sketch I did in pencil (crappy scanner didn't pick up the pencil very well). The second is a captain rex sketch I did for a sketch card give away a while back. Hope everyone enjoys. 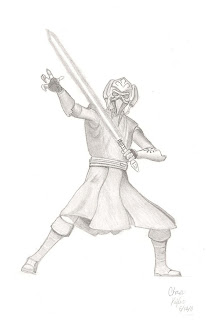 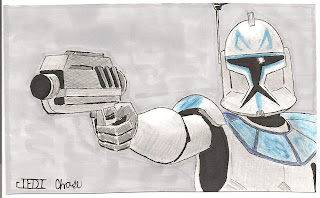 Posted by jedichase at 2:36 PM No comments:

Here are 2 pieces I did a while back. The first is a Boba Fett piece done in ink pen and sharpie. The second is a very small Vader piece also done in ink and sharpie. Hope everybody enjoys. I'll put something with color up soon. 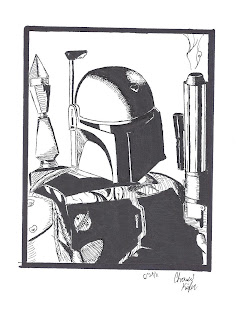 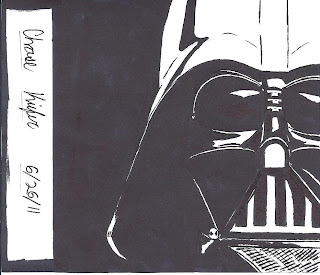 This your first step into a larger world.

This is the first of what is hopefully, a long journey. I'll be posting my art as well as adventures of my life. I'll spend a little while posting older sketches and art. So hop along for a journey into my life.

Here is the first sketch I'll post here. (I'll try to post 1 piece everyday, until I get caught up.)
Her are 2 very old sketches of Darth Vader and R2-D2. I think I originally did these in 2007. I consider this to be some of my first good sketches. These were done with ink pen and sharpie. Hope you enjoy. 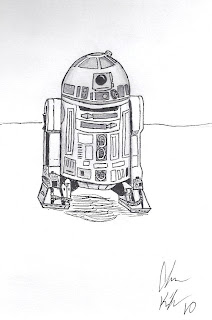 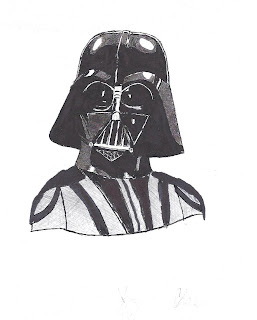 Posted by jedichase at 4:05 PM No comments:

jedichase
Hello viewers Here you will see my art. Most of which is Star Wars related. I'm a HUGE Star Wars fan/collector/costumer. I plan on becoming a computer animator as a career. Other hobby's of mine include juggling, archery, and film prop replicating.